What kind of impurities can be found from our indoor air?

Indoor air quality is affected by emissions from many different sources. Some of the emissions come naturally through the human body and others through, for example, human activity, household products, electronics, outdoor air inputs and building materials. In addition to the total amount of emissions, the varying characteristics of different pollutants have a major impact on air quality. Emissions emitted can be in the form of solid and fibrous particles, chemically volatile or very volatile organic compounds (VOCs and VVOCs) or in the form of microbiological spores.


Some of these emissions are a normal part of indoor air climate and do not cause problems, but some pose a health risk and can cause discomfort to the people using the building. Before deciding what measures to take to solve the problems, it is important to have an understanding of what undesirable pollutants are present in indoor air through sampling and analysis.

Emissions from human activities include side products of metabolism, such as carbon dioxide and certain ketones and hydrocarbons. Humans also spread viruses and bacteria. Examples of activities that negatively affect indoor air include smoking, cooking and even various types of handicrafts.

A common source of unwanted emissions are chemical compounds used in building materials to improve their technical properties, for example in particle boards, fillers, adhesives, solvents and paints. Particularly new materials can emit large amounts of pollutants into indoor air for several months after a building has been renovated or completed. Improperly manufactured, stored or installed materials can also cause problems.

The risks of moisture damage

Moisture can cause a variety of reactions and also destroy or adversely affect the original properties of the building materials. For example, 2-ethylhexanol is a common harmful VOC compound that can be formed when plasticisers in plastics and rubber decompose under the influence of moisture. In old buildings, creosote has been widely used as a moisture insulator in the impregnation of timber. When renovating such a building, care must be taken to ensure that the carcinogenic PAHs (e.g. naphthalene, anthracene, pyrene and phenanthrene) in creosote are not released into the indoor air. Other compounds of concern that can be released into indoor air from damaged building materials include TXIB (a process solvent found in PVC carpets), styrene (a liquid aromatic compound used in the manufacture of plastics and rubber), hexanal (an alkyl aldehyde) and formaldehyde.

Microbes can cause serious problems

Humidity and inadequate air circulation are common in places where microbes are detected in structures and on the surfaces of various building materials. Microbes can release spores, volatile organic compounds and toxins into indoor air, which can cause serious problems. Actinobacteria and Aspergillus fungi are examples of microbial findings indicative of typical moisture damage.


Asbestos has been widely used in building materials and as an insulator because of its good thermal insulation and fire safety. In Finland, the use of asbestos has been banned since 1994 because the compound can cause asbestosis and lung cancer. For this reason, when deconstructing structures, it must be ensured that asbestos does not escape into indoor air. In addition to asbestos, mineral wool fibres can also cause problems. These fibres can enter indoor air from building insulation materials through air leaks and dirty ventilation ducts. Other solid particles that can cause problems with indoor air are very small nanoparticles that can contain phthalates (plasticisers in polymers), flame retardants and heavy metals, among others. 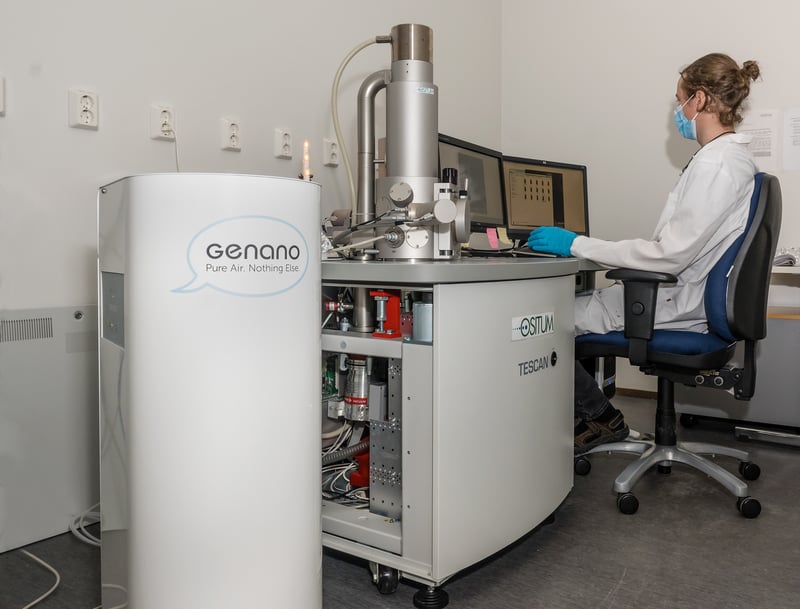 Outdoor air pollutants can enter buildings through ventilation systems and structural leaks in building structures. Typical outdoor pollutants are emissions from transport and industry such as carbon monoxide, hydrocarbons, particulate matter and oxides of sulphur and nitrogen. Organic allergens such as pollen can also cause problems for allergy sufferers. Radon gas can be a major problem if the building is located in a radon-prone area. Long-term exposure to radon can lead to lung cancer. As radon is colourless, odourless and tasteless, measuring equipment is needed to detect its presence.

At Ositum Oy, we believe that indoor air problems are mainly caused by chemically volatile and highly volatile organic compounds, microbes and their metabolites and/or mineral wool fibres. The main causes are often material damage caused by moisture, incorrect material selection and/or poor air exchange. Effective tools are available to detect and analyse indoor air pollutants, as are effective solutions to remove them and improve air quality.

About Ositum Oy and Juhani Kronholm

Juhani Kronholm's work at Ositum Oy in Vantaa includes the use of environmental applications and techniques to determine indoor air quality (e.g. VVOC and VOC compounds), material emissions (FLEC analysis) and hazardous compounds (e.g. PAH, PCB, asbestos, metals). The main tools for the determination of these compounds are SEM-EDX, TD-GC-MS, GC-MS and MP-AES techniques. Juhani Kronholm and other experts in Ositum Oy are also responsible for further development of various techniques and analytical tools. Ositum Oy has been involved in more than 30,000 projects related to indoor environmental issues over 20 years. The company has built a unique database application for reporting analysis results on VOC and VVOC emissions, among other things. The database contains around 600,000 records that facilitate the interpretation of the analyses performed.

If you found this interesting, we suggest these articles next:

Brands like Starbucks Autogrill have to do their own research in order to find...